From Haughton to Morpeth for Bell Ringing

From Haughton to Morpeth for Bell Ringing!

The Clock Tower on Old Gate in the town centre of Morpeth, Northumberland contains the oldest original peal of civic bells in the United Kingdom. It is one of only eight secular bell towers in England never to have been associated with a Church. It was built using stone from an earlier Medieval building between 1604 and 1634.

In 1706 a peal of six bells was installed in the tower, provided by Major General Edmund Maine, when he became MP of Morpeth. The bells were cast by the prominent bell founder Richard Phelps (of Whitechapel Bell Foundry) and were originally intended to be made for the Parish Church of Berwick-upon-Tweed. However, the people of Berwick failed to elect the Major General to Office a couple of years previously. On Maine's successful election as MP of Morpeth, the bells were presented to the Corporation of Morpeth. This gave rise to the curious local saying that "Berwick Bells are heard in Morpeth." To accommodate the bells, a top storey (belfry) was built in 1706. By the early 20th century, the bells had fallen into disrepair and were eventually recast and hung in a new cast iron frame in 1951 by John Taylor & Co to commemorate the Festival of Britain Two further bells were added to make a total of eight.

The bells are rung at 8pm everyday; marking the evening curfew in years gone by. The tower is a Grade II* Listed building and a Scheduled Ancient Monument. Morpeth Clock Tower has an active and enthusiastic band of ringers and welcome visitors to ring on practice nights. Recently, while on holiday two Haughton Bell Ringers, Helen and her daughter Lydia visited and rang at Morpeth, ringing there as guests.  Morpeth Bell Ringers have an interesting website at https://www.morpethbellringers.org.uk/

Helen explains: “We had another great holiday in Northumberland. It’s the first time we’ve been in the winter and it was wild and windy and still absolutely beautiful. There’s nothing quite like walking along a deserted beach all wrapped up against the elements with the dogs bounding along beside you. As usual one of the highlights for me was a visit to Morpeth Clock Tower. It was my fourth visit and I was welcomed with warm smiles and comments of ‘it’s the wrong time of the year, it’s not the summer’! It was a packed Clock Tower that night as not only were we there visiting but also a ringer from York. She was working in the area and had looked up on the Dove’s Guide (the bell ringers guide to all the towers worldwide, take a look as you’ll be amazed how many towers there are even in Australia, USA and Singapore) to see if there were any practices in the area that night. It was as normal a great night of ringing where the Morpeth Tower Captain, Matthew, did a great job of organising it so everyone had a good practice. The ringing levels of the people there were vastly different but everyone helped everyone else as is normal. In my opinion there is nothing like this hobby for just being able to turn up at any practice night to be welcomed with the words ‘are you a ringer?’ and then being bustled in to enjoy an hour of ringing.

We’re back up here next summer, for a week a little further North where I’m hoping to ring at Berwick which I believe is the most northerly tower in England. The second week will be back in Low Hauxley and ringing in Morpeth where I won’t confuse the local Band as it’ll be summer!!”

If you have found this article interesting you don’t need to travel all the way to Northumberland to learn more about Bell Ringing, why not come along to Haughton for one our practice nights (most Monday evenings at 8pm) Contact Tower Captain, Trevor Lock, who will be happy to explain more and welcome you to try your hand.  Details on this website.

Pictured: Morpeth Clock Tower in summer and the view from the Tower with the Christmas Lights! 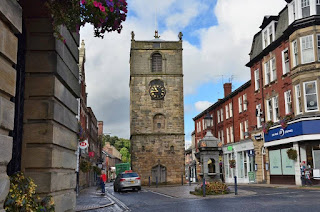 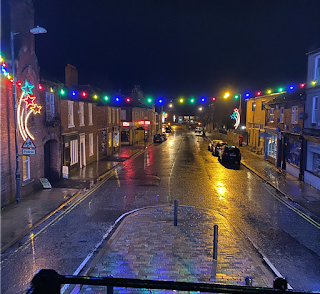 at November 28, 2019
Email ThisBlogThis!Share to TwitterShare to FacebookShare to Pinterest