Ringing for Doreen and Mark

Firstly Thank You to you all for your support while I was ringing for Doreen and Mark, who have both sadly passed away recently from Covid-19.  I have recorded the performances if you wish to hear them again or if you've missed them.

Doreen, (Mrs. Wheetcroft) would have been one of the first people I met after moving to the village, aged 3 in 1978 as she had been one of the playgroup leaders, which in those days was held in the Village Hall.
I've probably known Mark and the Elton family for as long, as my mother had worked in the village shop, and then later I worked in the shop while Charlie Pogue had owned it.  The Elton's would often pop in for their supplies and have a chat.  Later I taught Mark how to ring and he would ring for Sunday Service if he wasn't on Organ duty.
To adhere to the current government restrictions I used my daily exercise allowance and cycled to the church, locked the door so I could ring in isolation.  Wearing gloves I went up the tower and tied the bells, this enable me to set the bells without actually sounding them, so the correct number of rings would be heard for both Doreen and Mark. 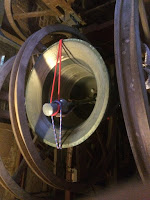 The 2nd having been tied and muffled, for Doreen. 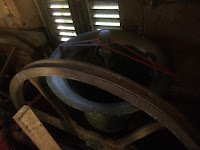 The 6th having been tied and muffled, for Mark.


Ringing in memory of Doreen Wheatcroft - 7th May 2020 - 80 half-muffled changes rung on the 2nd.
This performance has also been registered on our National Bell Board - Click here to view

This performance has also been registered on our National Bell Board - Click here to view
Usually, we would ring all 6 bells and would have rung a quarter of 1260 changes, this is not possible as it requires 6 ringers to ring in close proximity, and quite rightly is not permitted at present. When the lockdown has ended and the threat of the virus has passed we will ring something as a team in tribute to them both.
After ringing, I decided to hang the Union Jack, as it needed flying for the 75th anniversary VE Day celebrations taking place the following day.  The whole village including Julie Elton had decorated their houses with Union Jacks and St.George's flags. While pulling the flag up I remembered Mark with the help of Fred Price had repaired the flag pole, in the late nineties while being Church Wardens.  The gold weight containing the pulley at the top of the pole had come loose, they lifted the pole down and repaired it. It has been secure and fit for flying flags ever since. 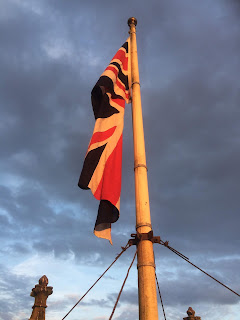 The Union Jack set to fly.


While there at the top of the tower, I looked around at the view, it was a gorgeous evening with the Spring Sun setting in the west over Gnosall, hardly a sound except for the singing of birds settling down to roost for the night, there was something very tranquil about it amongst all sadness and grief.
I've video the views, to share with the evening sunset with you. Starting from facing North and turning around clockwise to the east, south then west.

May both Dorren and Mark Rest in Peace.

at May 09, 2020
Email ThisBlogThis!Share to TwitterShare to FacebookShare to Pinterest