I was saddened to learn Ruth Fairbrother had passed away earlier this week.  Ruth was a regular visitor to our Monday night practice at Haughton for many years, just after the bells were re-hung in 1998.  Although her husband Ted could ring, he used to play Billiards in the GEC MRI Club at St. Leonard's Avenue, Stafford, on Mondays, and so Ruth used to drop him off on the way to Haughton., as they lived at Walton-on-the-Hill.  Sometimes there were no Billiards, so Ted would come alone with her and so we gained two very experienced ringers.  They were both keen walkers and traveled the world walking and hiking up mountain ranges which would make great stories to listen too in the pub after ringing.
Ted sadly passed away a couple of years ago.  I quite often used to see Ruth from my office window walking into Stafford Town Centre having got off the bus at The Green. My Mother and Father occasionally bumped into her up the Town, and she would always stop and have a chat with them.
Ted rang in the first Peal on the 6 bells at Haughton, and also rang in my first peal at Gnosall.  I rang many quarters with both Ted and Ruth and have very fond memories of them both.
Keith Brooks has also written a few lines about Ted and Ruth's Ringing and has supplied the photograph below of him having  a meal with Ruth.
Ruth and Ted attended the ringing at Brewood regularly when I was Ringing Master there from 1996-2007. They came on our outings with me in my car, they both rang in one peal with me at Brewood and also rang in about 15 quarters at Brewood as well as several quarters I called in other towers. They supported Bill at Lapley regularly as well and Roy Mowforth at Penkridge.
Very nice people!! 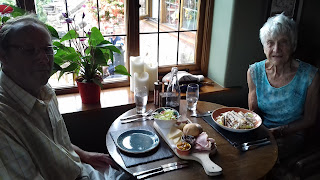 at May 10, 2020
Email ThisBlogThis!Share to TwitterShare to FacebookShare to Pinterest
Location: Haughton, Stafford ST18, UK